Quarter Scale Witch House 2 - It's all about the paperclay

I believe the most common use for Creative Paperclay®, among miniaturists, is as a covering on pre-made structures.  Once I had the floor plan designed for my witch house, I started thinking about how I was going to make the structure itself.  I designed the sides and roof, then made a small paper model to see how it would all fit together.  I was going to make the structure out of wood and cover it with paperclay – but, I started thinking that in quarter scale I might as well just make the walls out of clay.  It was then that I decided to make the entire project completely out of paperclay.  As most of you know, I LOVE the stuff!


My first thought was to cut the wall patterns out of dry clay and then assemble the structure, but I wanted a more “organic” feel to the piece.  I came up with a plan to make an interior form, cut the pattern pieces from cardboard, and glued, taped, and glued some more.  I used the floor plan, minus the width of the cardboard on all sides.  In order to accurately follow the plan, I had to figure out where all the pieces where going to overlap in order to make the wall patterns and adjust the widths accordingly.  I then covered the entire exterior of the cardboard with plastic.


I had already drawn the windows onto my pattern, so I transferred them to foam core, cut them out and wrapped them with masking tape (so the paperclay wouldn’t stick) the affixed them to the structure with double-stick tape.
As you can see from the photo, some of these walls are pretty high.  I knew that once I started adding clay to the structure the cardboard would start to bend, so I also glued some additional cardboard supports behind some of the walls.  I also taped wood strips to the cardboard model (not shown in the photo) before I covered it with clay.  The strips were used to create guidelines for the second floor, and for electrical wiring.

I rolled paperclay out to a 1/8″ thickness and applied it to the form, making sure to go around all the windows and doors carefully.


For the roof piece, I followed the same procedure but used cereal box type cardboard so I could bend it to the form.

I don’t have photos of the roof section when it came off the mold, I was too anxious to attach it to the rest of the house! Already had the doors and windows in, since I started with the gate & doors.  I’m signing off with these last two photos – next time I think I’ll move on to the stairway or fireplace. 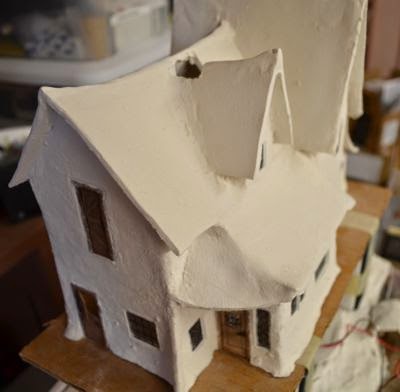 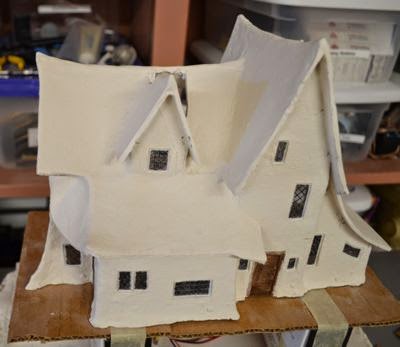